Saturday Oct. 3, 2k15; 9 emcees battled it out at PHENOM' & Friends 9 annual showcase. The 9 emcees competed in a live performance battle to win the opening performance slot at PHENOM's "I DIDN'T COME I WAS SENT" Album Release Party which occurs October 29th at The PROMONTORY in Hyde Park Chicago!!!

The competition was held at

All the artist involved showed a plethora or potential as they all brought their "A" game, but the victor was none other then the good brother LIMITLESS SOUNDZ. He exhibited the confidence and time of a seasoned artist. He read his audience and adapted almost in mid-stride. Chosen by a panel of judges he walked away with the win.

Now you can catch him & many other heavy hitters in the Chicago Hip-Hop scene on Oct.29th. Be sure to GET YOUR TICKETS to my "I Didn't Come I Was Sent" album release party. The event is almost sold out. 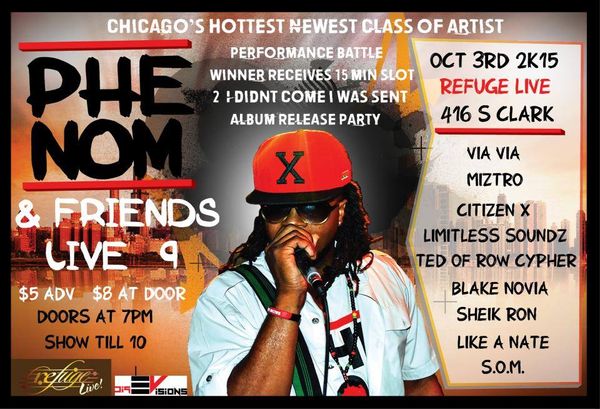